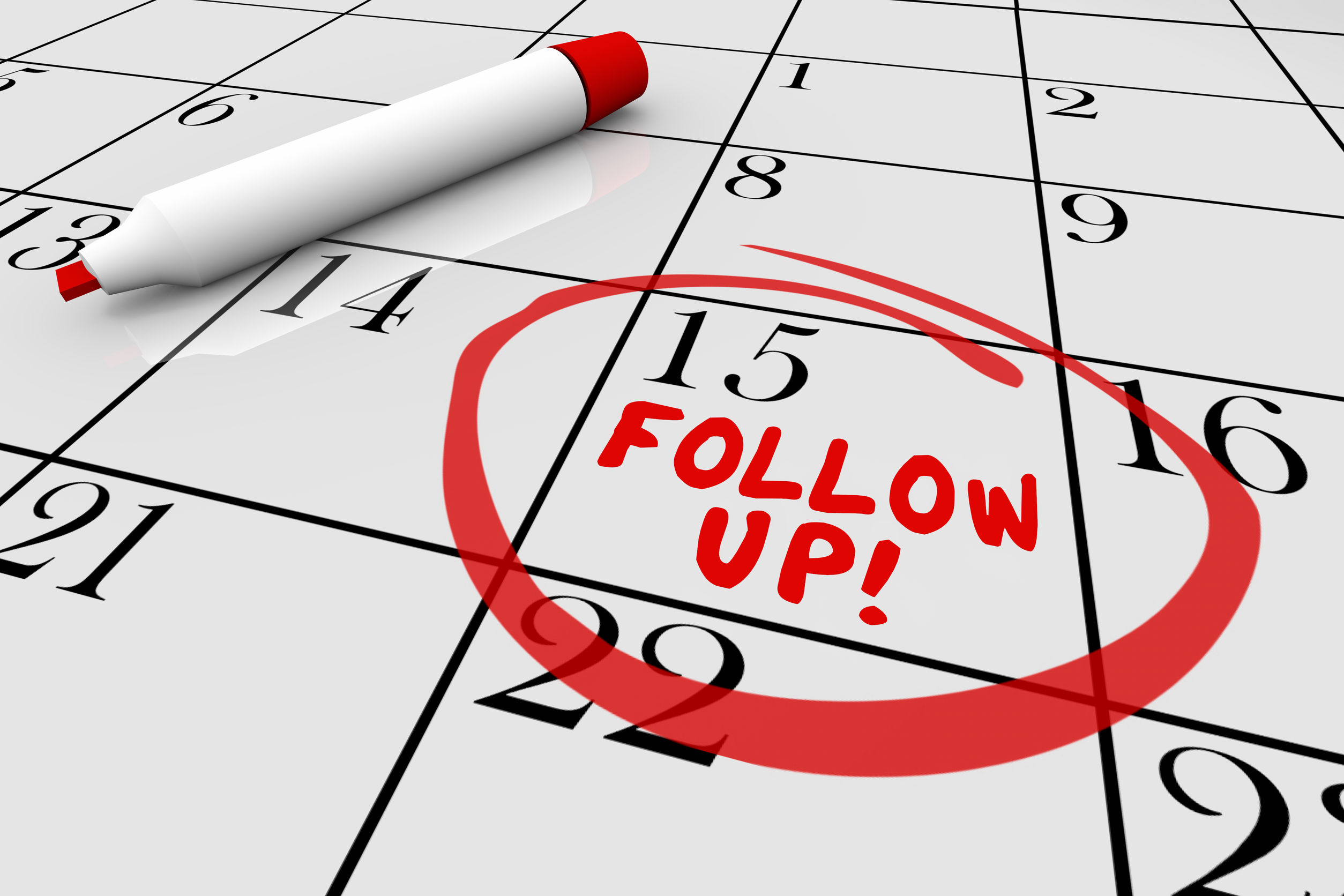 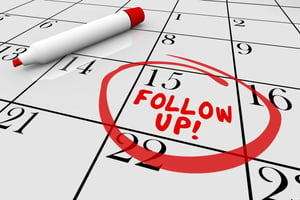 Has your sales floor replaced the hum of the phone for the hum of keyboard clicks? In a recent GSA Business Development blog, the U.K.-based author laments, "I often hear statements such as ‘We should never call on a Friday afternoon' or … ‘August is a bad time since people are away.' If I had a pound for every time I've heard those comments over the past 17 years, I probably wouldn't need to run my business. I could retire on these earnings."

The author continues, "The fact is that if you make sufficient calls, you will reach enough people whichever time of day or year you call."

So, which is it? Is there a time, date, or approach to calling your prospects that's scientifically better than the rest? Should we chalk it all up to hard work?

With the help of some studies done over the years, as well as personal anecdotal experience, I'll do my best to answer those questions below, as we build the perfect follow-up process for salespeople in 2020.

These days, many sales reps and producers are more comfortable sending an automated email than picking up the phone. But, before moving forward, it's worth identifying whether the phone is even the best way to follow up with leads today.

That answer is "Yes." Many studies show the phone is still the best tool in selling, with 41.2% of respondents naming their phone as their most effective sales tool.

Best Days of the Week to Call Leads

The best days of the week to call leads are on Wednesdays and Thursdays.

In the classic Lead Response Management Study, Wednesday and Thursday were the best days to qualify leads. In fact, there was a 49% difference between leads qualified (meaning they agreed to enter the sales process) on Thursdays and those that qualified on Tuesdays.

So, does this data still hold true today? A 2017 CallHippo survey looked at 24 weeks of data across thousands of companies and found Wednesdays and Thursdays are still the best days to call prospects.

In this survey, they found a 46% difference between calls made on Wednesdays (the best day to call) and those made on Mondays. Friday remained the worst day on which to call prospects.

Since this seems to be the case, it's important to note that when working with an inbound vendor, you speak with people when they are actually looking.  Knowing that, spend your time on Fridays' to finalize paperwork, review the week, and prepare for the next week.  Monday's and Tuesday's are great for follow up, scheduled times to chat or meet, as well as work your pipeline to back-fill the policies you are writing.

The Lead Management Study discovered the best time to qualify leads was between 4:00 PM and 5:00 PM local time. The second-best time was around 8:00 AM.  Morning and afternoon commute times might be a great time to catch someone to talk, but don't expect them to have all the information including their VIN number, policy numbers, or other specific information readily available.  Plan for this!  Scheduling a follow-up with specific information makes both parties aware of the next steps in the sales buying process.

The worst time to qualify leads during the work day? Stay away from the phone at 11:00 AM and 2:30 PM respectively -- unless you're unafraid of the 164% qualifying success rate difference between reps who called between 1:00 PM and 2:00 PM and those calling between 4:00 PM and 5:00 PM.

A 2018 PhoneBurner study, however, found the most productive time to cold call prospects is 10:00 AM in the prospect's time zone. Of those salespeople surveyed during this time, 15.53% had their calls answered -- 3% better than the second-best hour, 2:00 PM, which saw a 15.01% success rate. Their data did support the findings that between 12:00 and 1:00 PM is the worst time to call your prospect.

Now, these studies don't always take into account real life situations many agencies deal with, including a sudden influx of claims calls, time of month, and consumer paydays (traditionally biweekly). Catching people on their lunch is possible, but would you want to be interrupted during your limited time lunch break?  Save these times for inbound requests, and have a little lunch yourself.

The best response time for following up with leads is within 10 minutes.

The Lead Management Study saw a whopping 400% decrease in odds of qualifying leads when reps waited 10 minutes or more to follow up. And the rate of success continued to decrease the longer reps went before following up. The best time to call new leads was within five minutes of their first trigger event.

A 2018 InsideSales.com test seems to support this data -- kind of. In their survey, InsideSales.com Labs tested the response times and persistence of nearly 200 companies and scored their replies.

They did this by looking at only high-priority inbound leads signaling intent to purchase (i.e., demos, contact forms, or pricing requests). International siding company James Hardie earned the number one spot with a 3:48-minute response time and seven touches total.

They were the only company to come in under that magic five-minute follow-up mark, however. The other companies in the top 10 rang in slightly under or well above the 10-minute mark. LinkedIn had a 9:03-minute response time with five touches total.

The total touches here are the key point.  "One call close" type sales, while do happen and feel great when they do, are the outliers.  We've seen that it takes on average at least 5-6 continual follow-ups before a close.  Insurance prospects often don't even get that, and we've heard time and time again over the years that the success comes in the follow-up.

How to Make a Follow-Up Sales Call

With all of this updated data, what should you do when it pays off and a prospect actually answers the phone?

Sales reps should make at least six follow-up calls to leads before moving on.

The Lead Management Study shows reps should call at least six times before throwing in the towel. Shockingly, over 30% of leads in the study were never contacted at all. By making more call attempts -- or call attempts, period -- sales reps experienced up to a 70% increase in contact rates.

An article by EverFi President Preston Clark in which he laments "The Rise of the Silent Sales Floor." He says, "When the hum of voices is replaced with the hum of keystrokes, you should be very, very concerned."

To remedy this, Clark recommends reps learn how to lead a sales process from start to finish. "Every step. Every stage. Open to close."  One of the keys to follow-up is ownership.  When you take ownership of a buyers' process as their trusted adviser, you commit to that potential customer.  This increases perceived value as the white glove treatment goes very far in the sales process.

Make a Good Impression When You Connect with Leads

Sales reps should use active, friendly, and engaging language to interest leads within the first five minutes of connecting on a follow-up call.

The data experts over at Gong.io analyzed more than 100,000 connected outreach calls and analyzed them using AI. They found a few things to be true:

Sales reps should source referrals to increase the pool of leads they're following up with every day.

While the Lead Management Study's data showed reps should be calling at least six times before moving on, it's also important to pay attention to how many leads you're reaching out to.

A recent survey by Marc Wayshak shows most salespeople aren't getting in front of enough prospects. In fact, 66.7% of respondents reported reaching out to 250 or fewer leads in the past year. Only 15% reached out to over 1,000 prospects.

While 54% of salespeople in Wayshak's survey lamented it's harder -- or much harder -- to get in front of prospects than it was five years ago, these numbers also reveal an increased need for salespeople to outreach to more prospects and leads than ever before.

One way to boost your pipeline and gain more leads to call? Ask for referrals. 57.9% of respondents asked for fewer than one referral a month. Roughly 40% reported rarely asking. And only 18.6% asked every person they met with for a referral.

Since referrals have a much higher chance of closing, they can be a great place to start when you're trying to increase lead count and thereby the number of follow-up calls you can make.

Few salespeople relish making prospecting calls. But it's one of the most important parts of the job. So, shouldn't you do it well and maximize your impact, so you can spend more time doing the part of your work you actually love? This data can help you do just that.

Tell us what you think?  Do you have any helpful tips our proven follow-up strategies that work? We want to hear from you!

A Sharp Rise in Insuratech Spells Supply Woes for Market

21 Strategies Insurance Agencies Should Adopt in 2021